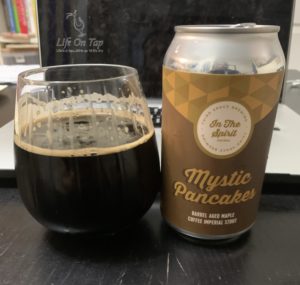 Earlier in the pandemic, Dan cracks a super-limited release via a beer exchange from Wisconsin: Third Space Brewing Mystic Pancakes.

Stats above taken from the brewery can.

A fight between bourbon and the ingredients at first, though my memory tells me it’s a big, fresh pour of maple syrup on chocolate chip pancakes. After the initial aroma fades, the dark coffee roast comes in leaving a cafe con leche kind of note.

It’s the pancake house fantasy from the nose, washed down with an excellent dark roast coffee all in one, but are able to separate the components. All the bourbon barrel character but with no heat and great balance with the ingredients.

They called this an imperial cream stout for a reason, and I am here for this smooth, creamy, and velvety mouthfeel.

This variant off of their Mystic Knot was super tasty, and could definitely be done as breakfast/brunch beer (with or without pancakes) or with/as dessert. If you have a chance to taste the variants, go for it.

Many thanks again to Laura H. in Daddy Porter’s Beer Group for this super-limited release via the share.

All music on this show came to us from the now defunct Music Alley.
Intro: “Meet Me At The Bar” by The Beer Drinking Fools
Outtro: “Bubblegum and Beer” by The Supersuckers