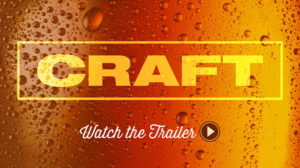 First of all, I would like to thank Kris McDowell (press at craftbeermovie.com) for inviting me out to this event.
CRAFT  is the brain child of  Craig Noble (Pixel One Productions), and is his unique “behind the scenes” look at the innovation and commitment to quality of our  independent craft brewers. This was actually the kickoff of the second half of the film tour – we watched CRAFT  and two other short films while sipping on some great brews  in the outdoor beer garden  at  Captain Lawrence Brewing in Elmsford, New York.
The first two short films were actually pretty entertaining – one featured wine production and the other featured oysters.  “The Perfect Oyster”  was extremely comical – I never really knew exactly how passionate people could be about oysters, although I enjoy them myself with a nice brew every chance I get.

Early Parts of the Film and the Featured Breweries

The film itself was broken up into a number of different sections, starting with how beer is made (taken right out of the Cicerone Program as I like to see).  From there, a history of beer from its early infancy through Mesopotamia through Prohibition and onto the modern microbrewery movements in the late-70’s, mid-90’s, and the current trend.  Of course, in any #craftbeer focused movie, there is a distinct delineation between the craft and macro brewers.  The Brewers Association’s definition was first stated followed by a checklist to make sure to highlight the quality of the ingredients and dedication to the process.  Clips from just a few of the many featured (though I thoroughly enjoyed Scott Vaccaro’s thoughts on a locality, culinary-focused and grassroots approach):

The section I found the most interesting (and new since I am obviously familiar with the other parts) was Craig’s personal story with regards to his professional growth and now membership in the brewing occupation.  Aside from his numerous awards for his lifestyle-approach to documentary filmmaking, he had either family ties or hands-on experience with cooking,  winemaking, distilling, and of course, home brewing.  This background and passion for all things culinary clearly led him to tackle on this specific project in addition to the other films shown.  For CRAFT specifically, he apprenticed on a farm brewery, attended beer school in Vermont and earned his Cicerone Certification.  All of the above are normally pursued over a longer period of time, but his previous experiences clearly paved the way to shorten his learning curve.

All the learning and preparation led to the creation of his own saison recipe, Farmhouse Ale.  As stated on the product information page, this specific style is patterned after the “seasonal” farm hands – this is the reason why saison and farmhouse ale are often used to describe similar styles of beer including French Biere de Garde.  After creating this specific recipe, he then had breweries on all stops of the tour add their own little flair to it making it their own.  Captain Lawrence was pouring some of my favorites (including the original one I sampled all those years ago, The Ginger Man), but I had to have (two of) the Scripted Saison.
I found the mouthfeel and weight of the beer to be a little heavier as well as the malt profile.  That being said it stayed true to style with the Belgian nature of the yeast character and low IBUs.  If you happen to head over to Captain Lawrence  and they have it on, I encourage you to give it a try.  The reasons why the crew at CRAFT  have saison as their go-to style probably echo my personal sentiment.  Saison is usually fairly dry, refreshing, not bitter, and VERY food friendly.  Craig mentioned that it killed with the Merguez sausage that they had been serving, but I was not able to get a taste before the movie had started.

After the movie had completed, we had a chance to interact more with Craig (although I had some time pre-screening).  He answered a bunch of different questions about his background, his approach to the film, as well as some more direct feedback.  One thing that was on some people’s minds was the selection of the featured breweries – some felt that there were some notable misses.  While some “industry superstars” might not have been featured, I feel the film accurately reflected the passion and opinions of a great many of the craft brewers.  Geographically the brewers were well represented for the US and Canada, but I would have liked to have seen more female representation other than Odell.  I believe many other people may not have been available (or even in the country) during filming.
Two questions that I wanted to ask (but did not have the time to) were:

â—  What was your first craft beer?

The latter is a question I like to ask people…it is really interesting to hear what I define as, “the beer that made you never want to have macros ever again.”  I have heard a great many people say the names of Belgian ales, though there have been a smattering of German, English and American.
The next chapter for Craig Noble has already begun, however.  He is now the Brew Chief at  Postmark Brewing, a part of the Settlement Building in Vancouver.  The revitalization of this historic building will also be housing wineries, a restaurant, and a distillery to provide a new culinary stop for both locals and tourists alike.  Farmhouse Ale, of course, will be one of four opening brews which will also include a pilsner, a hefeweizen, and one other which I will let you the reader check out for yourself upon release.

The  Captain Lawrence  tap room is truly amazing in both aesthetics, comfort, and shopping experience.  The locals truly have a tremendous resource that is hooked in and a part of the Elmsford community.  Michael Malone (malone5a at yahoo.com) writes  NOTES FROM THE TASTING ROOM section of Captain Lawrence‘s site.  Mike and I were able to have an extended conversation (along with Craig).  It was great to meet  another  person who is as passionate about beer and who works hard to promote  what happens at his local  brewery.  I will link to his coverage for this event in a separate post, so stay tuned!  Also a great big thank you to Mike again for providing me transport back to MetroNorth!
Although I could not partake in more beer (I had an early morning meeting and I did not want to carry/potentially drop a growler), the experience was fun and rewarding.  Although the trip to the old brewery would have been walkable (and thus not have to pay an arm or a leg for the taxi ride to the brewery), any expense would have been worth it.  My only regret was not pushing other bloggers more firmly to come out with me – there were a number of my colleagues who would have also enjoyed the movie, beer, and camaraderie shared.