Dream Up, Brew Up: A Visit to Guinness Open Gate Brewery and Barrel House

This is one in a series of posts from Dan’s #BeerNow AKA #BBC18 experiences.

For those who know my beer drinking tendencies, you may have heard me use the term “Equal Opportunity Taster”. To this end, I am willing to try (almost) anything once and I try to keep an open mind. When I saw the Guinness Open Gate Brewery and Barrel House as one of the pre-excursions, I honestly did not know what to expect. Like many of my fellow bloggers (as I found out later), many of us had pre-conceived notions about what the experience might entail, from multiple taps of the famed Draught, to teaching a proper pour, to similar historical accounts a la its Dublin counterpart. Sufficed to say, the whole team there brought their “A” game after only being open for 5 days, and I believe they can brew up what they dream up.

While our traffic-delayed trip with no bathroom on the bus was less than ideal, we made the most of it reconnecting and meeting our fellow travelers and living vicariously through the social media posts of those who had already arrived. As we pulled up, we were impressed immediately by the sheer size of the new facility and how it was designed to merge the Guinness and American beer cultures. Miniature exhibits were setup next to the merchandise and bar areas, alongside reproductions of the famous illustrations and brand paraphernalia. These historical foundations run deep locally as well; the site is actually where the first distillery opened post-Prohibition.
Approaching the bar area, my jaw dropped as I read all the available offerings that were brewed on premises; sometimes we forget that with all the history, their modern flagship beer has only been brewed since the mid-Twentieth Century. I led off with the Black IPA (balanced the roast ’n’ toast well with the hops) before jumping into the Barrel-Aged Stock Ale (better sip this liquid dessert with dark fruit and plenty – it’s 10.7% ABV).
We were able to get a quick preview of the 10-barrel system, but the beer pairing dinner was the highlight of our first day’s visit. I must add that the restaurant (kitchen included) was still under construction, so the chef and staff managed to pull this entire meal for our group in only a prep kitchen. We dined on some high-tops in their private “Barrel Room”, and were treated to a 4-course meal of deliciousness. My favorite pairing was a tough call, but if pressed, I would have to say the Barrel-aged Stock Ale with the Date & Raisin Bread Pudding, Fig Brulee with Cherry Spoon Custard took the cake (dessert pun intended). I felt that the complementing flavors made this the perfect bite to finish the meal. After wrapping up for the evening, we boarded the bus and checked into our Baltimore hotel before gallivanting around town for a few hours at Brewer’s Art and Max’s. 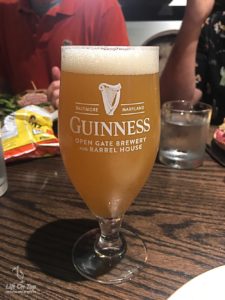 Arriving back on premises, we quickly jumped back into sampling all the creations we had missed the previous day. After an awesome Q&A with the Ryan Wagner, Heather McReynolds and Senior Brewer Sean Brennan, we were given the full top-to-bottom tour in and around the facility with Ryan: through the brewhouse, perusing and discussing the significance of the repurposed equipment as decoration and even limboing under chains to see the restaurant still under construction. Many of John Gilroy’s illustrations direct from Dublin graced the walls as we came up the stairs, and I imagined the place flocked with local beer lovers clinking glasses and breaking bread. Before making our way outside, we headed back to the bar for some additional samples and were greeted by a familiar face: our fellow blogger now Marketing Manager Oliver Gray. He and Ryan fielded some additional questions not just about the brewery, but how Oliver transitioned into working in the industry for which he is so passionate.
If there is one theme you will hear throughout my #BBC18 coverage, it would be HOSPITALITY. Heather, Ryan, Oliver and the entire staff really made us feel comfortable and at home, and I wanted to take a moment to acknowledge their commitment and hard work in preparing for our visit.
Strolling outside the brewery, we were told more history about the buildings on the grounds and how they were transformed for the Brewery. Interesting fact the lawn outside is in the shape of a pint glass! Malt and hops will be growing around the courtyard area in the future, exposing visitors to the beauty of the raw ingredients for the beer they are tasting. While we couldn’t enter the 100-hectaliter facility, we did get a peek into one of the front windows to get an idea of the space where Guinness Blonde will be produced, the first of which the left the brewery on August 21. A failed attempt to retrieve some 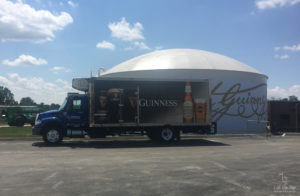 water at the refitted classic truck brought us past a delivery truck in front of the large tower for fire suppression emblazoned with a giant Arthur Guinness’ signature. Apparently this had been copied and used everywhere directly from the original lease signed for St. James Gate, which also appeared quite large on the paper.
Speaking of paper, we were able to view a number of original log books and other artifacts from Ireland. I am amazed at how the data was well kept, but even more so for how well their condition faired over the years. Winding down our tour just outside of the 10-hectaliter facility, we were able to ask some additional questions before having a little downtime to sample more beer, absorb our surroundings and do a little shopping in the gift shop. Unfortunately, no beer was available to take with us, but we definitely took away a truly unique experience that shattered my preconceived notions.

I believe the team brings a huge passion for beer, food, and experience, and I hope that the visitors enjoy themselves as much as I did. On the business side of things, I hope that this ongoing “focus group” offers key insights, data and anecdotes to better inform decision-making with regards to future releases and more. The beer palate seems to be constantly shifting, and having a test bed to receive direct input will be invaluable to this end.
Once again, many thanks to the crew at Open Gate Brewery and Barrel House for the hospitality and huge effort put in for the #BBC18 crew.

Remember, life’s a tap…drink up ’til it’s dry.